We enjoyed an evening performance in Hamilton of A Little Night Music. Andrew's brother was Count Carl-Magnus Malcolm, the dragoon who needs to be taught how to be a more devoted husband :P Among other highlights was the dropping of his pants... not something we were expecting, but (no offense) we were relieved it was only the pants that came down (as I'm sure he was!). In all seriousness, it's great to see a group of people come together to put on a musical. I loved hearing them sing the songs from this Stephen Sondheim musical.

We put together an IKEA Expedit shelf to match an already existing one in our dining room: We then took the time to reorganize the existing shelf as well as the new one. On the existing shelf, we put the games we were most likely to use, as it's more easily accessible and closer to the middle of the dining/living room. 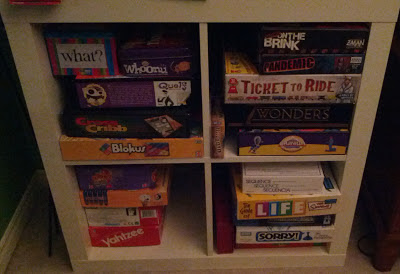 In the top sections of the new shelf we put other games and a couple puzzles that we like but use less often. In the bottom sections are my scrapbooks! They finally have a home and don't have to be stacked on the floor or a table. 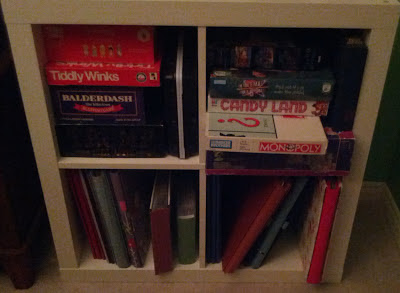