Somewhat unexpectedly, a few weeks ago, I became "in charge" of collecting stuff for a Memory Book for the same family I made the Signature Quilt for. This meant collecting photos of the family as well as photos of families in our church and index cards with messages for the family.

It also meant that someone had to put the Memory Book together. I really didn't think I would have time to do it (especially by myself) and so I enlisted help from others in the church.  Three women volunteered and we had a great night putting the book together.

Initially, it was supposed to just be a matter of sliding photos and cards into a semi-traditional photo album with plastic slots. However, I couldn't find one big enough, so we made a "simple" scrapbook.

Side note: I bought the album today at Michael's and they were having a "Buy One Album, Get the Other for 1 Cent" event! I've never ever seen an album so cheap before :) It was amazing!!!

In under 3 and a 1/2 hours, the four of us had created 32 pages for the Memory Book! We just need to remove the stock photo on the front and put in a picture of the whole congregation (taken at the church picnic in June). 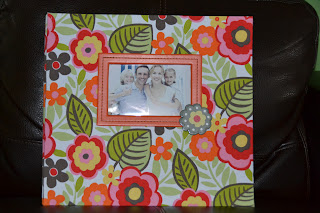 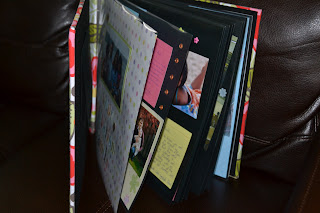 I am super happy with the way it turned out! We were even able to add embellishments and everything looks really coordinated. Thanks to the ladies that made this possible!
Posted by ~Courtney at 23:30