So most people in blog-world are also super heroes and they posted their fall posts (and finished their mantel) in the beginning of September. Me? I'm no super hero.

So here we are, after Thanksgiving and I'm just getting to pulling out the Fall decorations. Since I've been reading blogs over the last year, I've seen many awesome mantels/vignettes and I would have thought to pull them off would require big bucks.

So I've set my sights on creating a Fall Mantel that I can tweak in a week or two and turn into a Halloween Mantel.

I didn't take a 'Before' photo per se, so I had to go through some recent photos to find one (and cropped out half of my brother-in-law's head). It's a pretty plain mantel.

I own a fair amount of seasonal decor, though it's a mix of modern and cutesy but I didn't want to spend any money and I also wanted to use some non-fall items to keep on my mantel year-round. So below is the 'After' photo. 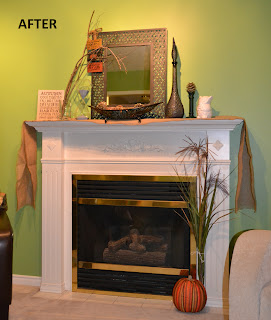 Since it's likely hard to make out the detail (though you should be able to click on the pictures to make them bigger) I've included some close-ups below. 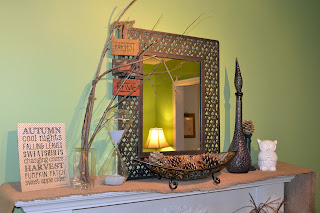 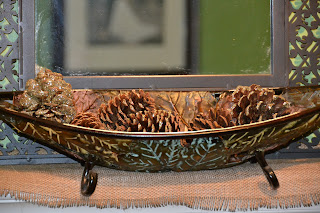 Mirror: Purchased when we bought the house.
Leaf dish: Wedding gift from my aunt.
Pinecones with sparkles: Made last year for Christmas. 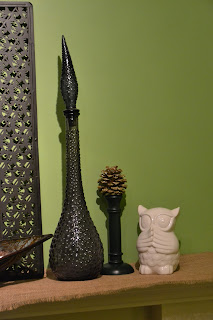 Decanter: From Andrew's Grandma.
Candlestick: Recently got for another craft project (free).
Owl: Purchased months ago at Winners. 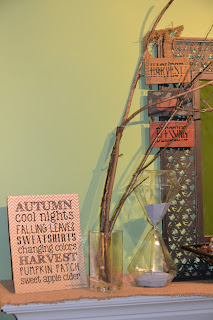 Subway art: Free printable glued to cardboard.
Sticks in vase: Collected sticks on nearby path placed in vase (not new).
Hour glass: Purchased months ago at Winners.
Harvest/Blessing ornament: I think my mom bought this for me a couple years ago. 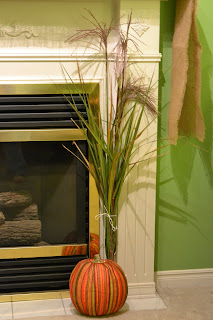 So not one dollar was spent on this great mantel (if I do say so myself). I found this blog from Home Stories A 2 Z really helpful in pulling the mantel together. They offer 2 formulas for decorating mantels: The Visual Triangle and Making It Symmetrical. I chose the Visual Triangle (hopefully it's obvious).

Anyway, that's how I spent a good part of my day - making my home pretty! Any questions let me know.